Recent Reads: From Bad to Cursed by Lana Harper 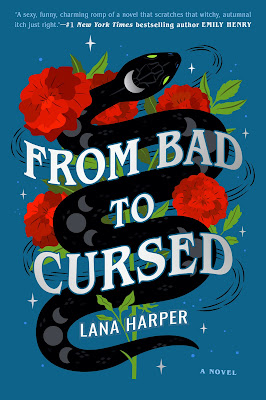 From Bad to Cursed by Lana Harper
Series: The Witches of Thistle Grove #2
Publisher: Berkley
Publication Date:  May 17, 2022

Opposites attract in this wickedly charming rom-com by Lana Harper, author of Payback’s a Witch.
Wild child Isidora Avramov is a thrill chaser, adept demon summoner, and—despite the whole sexy-evil-sorceress vibe—also a cuddly animal lover. When she’s not designing costumes and new storylines for the Arcane Emporium’s haunted house, Issa's nursing a secret, conflicted dream of ditching her family’s witchy business to become an indie fashion designer in her own right.
But when someone starts sabotaging the celebrations leading up to this year’s Beltane festival with dark, dangerous magic, a member of the rival Thorn family gets badly hurt—throwing immediate suspicion on the Avramovs. To clear the Avramov name and step up for her family when they need her the most, Issa agrees to serve as a co-investigator, helping none other than Rowan Thorn get to the bottom of things.
Rowan is the very definition of lawful good, so tragically noble and by-the-book he makes Issa’s teeth hurt. In accordance with their families’ complicated history, he and Issa have been archenemies for years and have grown to heartily loathe each other. But as the unlikely duo follow a perplexing trail of clues to a stunning conclusion, Issa and Rowan discover how little they really know each other… and stumble upon a maddening attraction that becomes harder to ignore by the day.

Review:
I was so excited for this sequal that I pre-ordered it... but then it took me a while to pick it up and it was a little slow on the reading front for a while there.  This book is in the same small town of Thistle Grove and follows the same families of witches as the last book in the series but our main characters are different. In this installment, our main character is Isidora Avramov the younger sister of Talia who we followed in book one. There is a curse that has taken over the witching town and her family has left it to her and the Thorn scion to solve who or what is behind it. Issa and Rowan have a troubled history and that will make this very interesting.
The romace we get thorough this book is very much the enemies to lovers trope. It was done well enough for me and I liked these new characters. I found it interesting that we got another Avramov so quickly since we had one in book one, but it flowed well and made sense in the end. I felt like there needed to be more behind the plot and the curse, a lot of time was spent on banter and internal dialogue in this book. The banter was fun and funny, but there was a LOT of internal dialogue and that stunted the reading experience for me a bit.
All that said, I am enjoying this series and am excited to see who we follow in book three, looks like a Blackmoore.. and a non-witch ...ooooh excited!
Reviews by Steph