Recent Reads: The Doors to Nowhere by Chris Grine

Source: From Oni Press in exchange for an honest review. This in no way alters my opinion or review. 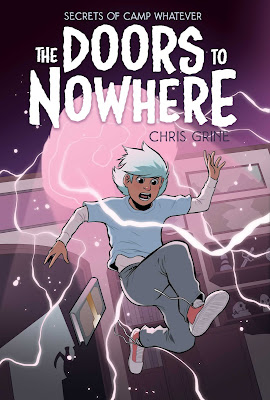 Full of thrills and chills, Willow and her summer camp friends have more mysteries to solve in this sequel to the hit graphic novel, Secrets of Camp Whatever!
When twelve-year-old Willow went to her weird new town's even weirder summer camp, she didn't expect to get caught up in an ancient mystery involving forest-dwelling vampires, living garden gnomes, and other completely bonkers creatures most people would never believe exist. Now she's not only involved, she's marked—too close to the heart of an ages-old quest for power and control than she should be, and too concerned about her new friends and the dangers they face to let them go it alone. With the help of a spell book and her scrappy crew of camp friends, Willow is about to step through a doorway to magic and discovery that will change her world forever.

Review:
This is the second installment of Camp Whatever and it was crazy right from the beginning. We meet  up with Willow and her friends back home on in Nowhere for her birthday. Even though they are back, they are still in the thick of supernatural, fantastical things happening and now there is an ancient prophecy that seems to be starting.
I liked this book, it was good. Some of the same notes from my last review apply here as well. The illustration was still vibrant and detailed. There was still a lot of dialogue. The characters are more or less the same with the same issues and struggles and Willow is still a bit rude to people, which is a bit of a turn off. Overall the story was fun, action-packed, and moved quickly. It was an easy read, and kep my attention.
Now maybe this is becuase I am an adult reading it but I had some issues with the plot... (and they might all be made clear later in the series), but it seemed like Mr. Elric set the kids up. He knew about this prophecy, and still gave Willow her great great grandmothers book, which seems to be waht set this all further into motion. I struggle that this is the reason for the book and Elric doesn't full explain the reason for gifting the book. Just things I think about...
This installment was darker than the first and a little more violent, but overall I think Middle Grade readers will enjoy it.
Reviews by Steph